What are blended forms?

A word blend is formed by combining two separate words with different meanings to form a new one. These words are often created to describe a new invention or phenomenon that combines the definitions or traits of two existing things. Word blends are also known as portmanteau, a French word meaning “trunk” or “suitcase.” Author Lewis Carroll is credited with coining this term in “Through the Looking Glass.

How did they come into existence?

English is a dynamic language that is constantly evolving. Many of the words in the English language are derived from ancient Latin and Greek or from other European languages such as German or French. But starting in the 20th century, blended words began to emerge to describe new technologies or cultural phenomena. For instance, as dining out became more popular, many restaurants began serving a new weekend meal in the late morning. It was too late for breakfast and too early for lunch, so someone decided to make a new word that described a meal that was a little bit of both. Thus, “brunch” was born.

Now let’s look at some examples of word blends:

1. Mocktail (mock + cocktail) = a cocktail that has no alcohol in it, mock = fake, so this is like a fake cocktail 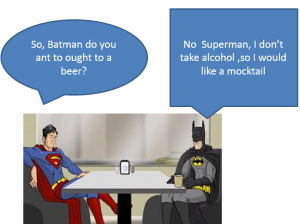 2.Won’t (Will+not):When you would not do something but only in blended form

4. Internet (international + network) = the global communication network that allows computers around the world to connect and share information

Eh,don’t worry Jesus ,you will get a hang of it ! Just like we are getting a hang of some new blended forms ! Happy Learning! Why is online education the future of education?